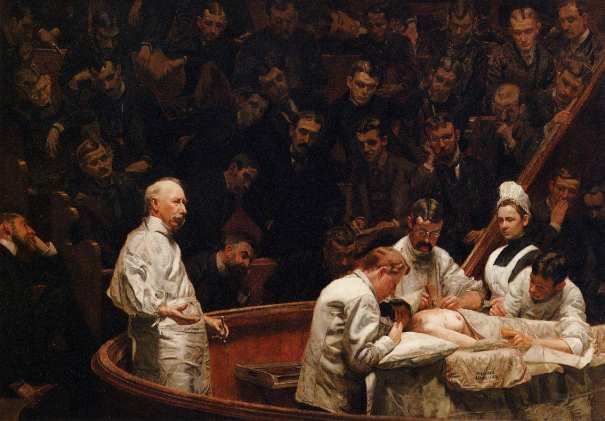 The men in the dark background remind me of us as medical students. Curious. Eager, even. We tried to hide it better than they did, of course. We knew enough not to stand on tiptoe and crowd over one another’s shoulders, not to turn the patient into an object, a specimen, a freak show. An “interesting case.” And of course we didn’t want to appear, to our fellow students, so fresh and inexperienced as to be eager about anything. Even if it was our first time seeing — whatever, the angry red triangle of zoster; the inside of the chest wall; the hard rock of a testicular tumor — we didn’t want to seem as though it was our first time. You never knew, the person standing next to you may have already seen five, or fifty. She may have worked as a surgical tech. He might well have been a research coordinator for a Nobel-winner’s study on testicular cancers. Probably.

But if we didn’t look exactly like these men, that’s what we felt like. If there was no actual theater, there may as well have been. We were the watchful and anxious audience. We stood, secretly, on tiptoe. We wanted so badly to know and to see. But even more, we wanted to be known, to be seen. It was never clear who this was all really about: the patient? Or the doctor? One thing was clear. It was never about us. We were in the background: marginal, shadowed, undifferentiated. Safe as we were, there wasn’t a single one of us who didn’t, at some point, long to trade places with the pale, touched, naked woman. Even if it meant being held down and sliced open, all we really wanted was to be under the light.